The Burqa and Nicab - A choice or a suppression? 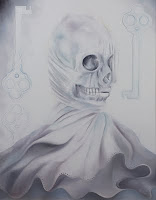 Arguments abound on the purpose and meaning of the burqa, the voluminous head to toe outer garment, and nicab, the full-face veil, of Islam. Critics of these garments are often derided for a lack of cultural savvy resulting from their uninformed prejudice, or, strangely their "racism" or "sexism". Intrinsic to my protest of these garments is that they contribute nothing toward advancing women's rights (as is the claim) and do more to harm the cause for all women's liberation and self determination and in particular harms efforts to advance the human rights of Islamic women.

The inescapable facts surrounding these garments are that they:
- instil and reinforce a religiously endorsed gender inequality (only women are required to cover their person in such a manner in public, Koran 33:59); and
- reinforce a religiously derived idea which regards women as the sexual possession of men to be a normal part of any social contract that might exist between men and women in Islam (Koran 2:223). Women in Islam are the property of men whom they must obey for fear of physical punishment (Koran 4:34).

The word "Islam" literally translates as "submission". Whether one cares to acknowledge it or not the burqa and nicab are more than a symbolic submission of the female. The female submits before what is arguably the most patriarchal of religions. Where it claims that it protects and elevates, it instead makes the wearer, visibly invisible in order to control and in so doing devalues the gender due to its gender. When the sound of a woman's walk is prohibited (in strict Islamic regimes) and the visibility and presence of women directed to be hidden (Koran 24:31), then any culture, religion or society should weep for it is not in tune to its humanity.

In 2010 I exhibited four new paintings, physically and in video format, illustrating this contradiction that women have choice and are free in Islam and are protected by the burqa or nicab if not elevated by these garments. I intend my paintings challenge the "elevation" and "protection" argument as well as highlight the misconception that the burqa and nicab are somehow a matter of fashion or choice, thus providing the wearer with security and empowerment. Rather, I contend that the evidence suggests they represent symbols of ongoing, antiquated religious and cultural suppression of female sexuality, independence and self-determination.
Baleful Worship - Submission, Isochronos - Metamorphosis with Niqab, Freedom I and Freedom II are a continuation on my general theme of religious protest, this suite of four are remarking on the characteristics of Islam in it's attitudes to women as well as what is expected of its pious followers. Traditionally a key is symbolic of control. However, in Isochronos - Metamorphosis with Niqab, Freedom I and Freedom II, control, independence, time (progress) is illusory. In Freedom II the keys are rendered useless and the subject slowly disintegrates behind her veil. Indeed in three of the works the figure is barely animate and whereas a metamorphosis such as with Isochronos..., normally produces improvement and new life a stasis results.

See the short video on YouTube
My work deliberately attempts to pose what can be challenging questions about life, sex, death, religion, politics and ethics. The thematic arena of my work ranges from human rights to the philosophical. The figure is the pivot and focus for the viewer, the figure is humanity.

Posted by LeeAnneArt on twitter @leeanneart at 7:33 PM No comments:

A movie review of sorts...

I recently watched this movie for the first time out of surprise I think due to the simple fact I had never before encountered it.

Gorgeous cinematography and costuming is intended by design to please the fashion conscious palette of a particular audience. Perhaps one also seeking relief from more serious matters going on at the time (like WWII)? It contains a soft porn Dalie-esque fashion show, irrationally plonked, in the middle which unlike the rest of the movie is presented in colour for effect. It was meaningless escapism mechanism and a little ludicrous, particularly as it went on forever until, its whole purpose was revealed, to stage a hostile meeting in the changing rooms for the two main protagonists. Enter evil Shop Girl husband thief and jilted especially saintly wife. Following and equally ludicrous there was an exercise class scene which confused me and I lost track of a few chatty characters. I couldn't keep up with the super fast talking. It was all a little too "Lucile Ball".

Not one man enters the frame, hence "The Women", though several "cads", "cowboys" and "poor schmucks" are referenced. The lack of any physical male presence was the not so subtle subtext of the movie. Men may have been subsumed to become merely referenced but they are still immensely important. This device, making men invisible though clashed a bit with how important they were to our women's lives. Though it was a comment on how men are possibly over represented by most cultures, and including in most movies, making them visually absent didn't reduce this emphasis. The viewer does not miss them though strangely. This device may have some believing we are therefore privy to a pure feminine world? Hmmm... as it is utterly filled with obsessions about and surrounding men it is hard to accept this idea has much existence outside fantasy. Though it isn't wrong that female relationships take a firm back seat as a relationship between a couple strengthens, is this also the case for male friendships?

Our "heroine's" lost love was a misguided fellow lead astray by a gold digging "shop girl" from the perfume counter. The movie ends with the idea that a "wife" should forgive her "husband" of all and any unfaithful discretion because after-all he is "only a man", manipulated by an evil woman who desires what her rival already has. Envy is big in this movie. After-all a woman, her standing in the community etc. etc., is only held as a result of the man she is permanently attached to so she must protect him and that alliance. Without it she may as well go to Reno get her divorce and become invisible. Unless she has fallen pregnant to the "cad" first and then all is forgiven immediately! If she is unfortunate not to be suddenly pregnant then she must relinquish her pride because this is all which has been preventing her from forgiving him and saving him from himself! Astonishing. Even for the early part of the 20th century, the main premise of the movie is a bit of a shocker.

So many unruly gender angles, contradiction and dishonesty.
Perhaps I took it all too seriously but I can't dismiss the niggle I felt about the subtext which was heavily reinforced behind all the fluff and drivel.

Posted by LeeAnneArt on twitter @leeanneart at 8:59 PM No comments: