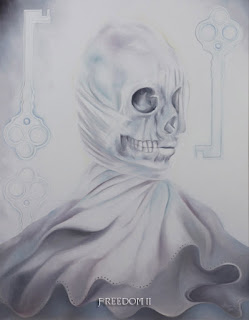 Read more »
Posted by LeeAnneArt on twitter @leeanneart at 7:15 PM No comments:

Which religion is it okay to criticise for being backward and oppressive?


An Australian women's magazine The New Idea has the answer, it is conservative Quakerism an alternate form of Christianity.

I have with joking cheekiness, on occasion, referred to the New Idea as No Idea but I can't argue with the inherent logic of their current Ad campaign - see the video link above. Though it has flaws, I'm relatively impressed. The campaign is I believe intentionally plugging into real issues for women held back and suppressed by their religion and communities, but are treading very carefully in doing so by using a pragmatic point of reference.

The ad depicts a conservative and backward Christian community where normal human behaviours and needs are suppressed and actively oppressed particularly for women. Quaker communities can be illogical, counter intuitive even antithetical to normal human behaviour and backward thinking...regressive by obsessively enforcing a rejection of modern society and a cloistering of the community on all levels from education to dress.

Because the demands of the religion and community set people up to fail or be miserable in complying with an impossible creed or irrational moral code. Add to this oppression of normal human interactions a forced or reinforced disconnection from other societies, ways of thinking, invention and experience. If stasis and subjugation of a people is the aim then this is a successful model.

That briefly addressed, most readers may agree with or find only mild issue with the points above for this assessment of Quaker communities is generally an accepted one.

What I'd ask the reader to further and more importantly consider is would the magazine or any individual get away with it - criticising the religion/communtiy this way - if in place of this Quaker example they instead depicted a similarly conservative Islamic community in this same light?

The Quaker maid's bonnets and cumbersome dresses would be replaced by the veil or the hajib or even dare we say the niqab and burqa, removed to set the body, hair, face and eyes free. New ideas might come in place of the lapsing of these restrictions place on the individual by the religion/community.

Unfortunately the reality is if Islam were used as the example the answer is they would not get away with it.

For if they did use Islam to depict the conservative and backward community enlivened by the opening up of awareness of self and others, one or all of the following charges would be drawn to ensure the Ad would already have been pulled.

a) The ad is racist towards Muslims.
b) The ad depicts Islamic women as sluts and western whores.
c) The ad is blasphemous towards Islam.
d) a-c as all offences apply.

Good on New Idea for having a go. Soft target though it was, in reality they had little choice if they wanted to make a point at all.

Posted by LeeAnneArt on twitter @leeanneart at 7:08 PM No comments: