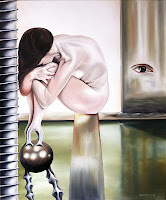 
At approximately 4pm Friday 7th October 2011 Australia's leading telco, Telstra, informed us we had until 4pm Monday 10th October 2011 to remove a swathe of our websites or they will cut off our internet.

Our websites will be removed in their entirety.

Robert Raymond Cripps and his lawyers have threatened Telstra with repercussions if they do not act against us.

We have no choice other than to fight what is essentially a SLAPP.

For those unfamiliar with the term it means "A strategic lawsuit against public participation (SLAPP) is a lawsuit that is intended to censor, intimidate, and silence critics by burdening them with the cost of a legal defense until they abandon their criticism or opposition."

It is more commonly used by large corporations to silence the voice of a smaller less well resourced opponent such as protestors, bloggers...individual critics of any type. The usual characteristic of the recipient of the SLAPP is they are individuals or very small organisations.

This system of manipulation of the law is effective if it works. Silencing a protestor, removing evidence of criticism combined with waiting until the "weaker" opponent's funds or support mechanisms are gone has its advantages to the larger more well resourced complainant.

Cripps has finances and legal connections along the lines of the better resourced. His strategy is to defeat us by removing our ability to defend our position legally. Lawyers are costly, the legal system is costly full stop. The legal processes are very, very slow, plodding. These actions make a plodding process move glacially slower. Lawyers and defences to further challenges need to be maintained. Matters, we discovered, do not go through to the courts in a straight line. It may seem naive but it is more astonishment that the processes do not have logic or relative fairness behind them. Rather it becomes apparent that the more a defendant wishes to see the complaint addressed in court, the more the complainant attempts to have it pushed further aside and outside of the ambit of influence by the court.

The result is costs, delay and further entropy of finances. Individuals with meagre financial resources are hardly equipped to engage on a level that can be considered equal. All this motivates the defendant more, perhaps an underestimated side-effect.

In other words what he and his legal team are doing may, indeed it usually does, work (it may not be ethical in the real world but it is legal) but not yet.

Following posts will include the claimed defamatory content Cripps wants suppressed before we even have a chance to defend the truth in a court of law.

He sued us initially for 180k now it is 100k. For a conclusion outside of court according to his demands, we would have to pay this and more (remembering this doesn't address other costs), take down our pages and agree to never mention, write or reference the claimed defamatory content again.

Not going to happen. Not now, nor if the SLAPP and Chilling succeeds.

At every opportunity I will continue to warn and establish the truth about the experience I and Demetrios were subjected to by Robert Raymond Cripps at his Guildford Lane Gallery.

That's outrageous - apart from the content of your website being your statement (not Telstra's statement) - I don't see how an allegation alone is all that is necessary to prevent you expressing yourself.

I don't know if this helps - but my understanding is that if you lodge a complaint with the telecommunications industry ombudsman (http://www.tio.com.au) it stops any action on your account until the complaint is resolved.

Thanks we have done so in the small time frame Telstra afforded late Friday. As we are essentially an ISP there is no exposure to another party. In the telecommunications act the definition of an ISP confirms this. Thanks for your support and thoughts. Lee-Anne

I don't know much about the art gallery business, but it seems to me this ***hole Cripps may be cutting off his nose to spite his face. I may be wrong, but it seems to me that having a good reputation as an honest and forthright person would be vital to a gallery owner/operator. There must be a strong measure of trust between the owner and artist for the process to work. Cripps may win his legal battle with you; he may block your words from public view and he may even collect a little money from you - that's the best case scenario for him. But his attack on you - which will be manifested every time his name is Googled for time immemorial - will lead all future "customers" of his to come to the conclusion that this guy is an unstable bully, a dishonest businessman, and a person best left alone. This attack on you is magnifying the alleged damage he claims you have done to him through libel; as this thing grows and grows, his reputation sinks further into the gutter. You two will one day walk away from it, bitter and a bit poorer financially, but with your reputations intact. He will walk away from it boasting a victory but to all future business prospects, looking like a complete nut case. Y'all keep up the good fight!

Thanks David,
You are right of course. The more we are thumped the more we will tell others about it. I'm not sure where that will leave us, but Cripps does and will continue to have this as his own legacy to deal with for sure.
Some artist I know have had worse treatment than this and I feel for them, writers too must bear awful experiences like this. We have perhaps less grace and tolerance than they might. I would rather bullies were exposed. Thanks for your great comments and support.
It gives us strength.
best wishes,
Lee-Anne