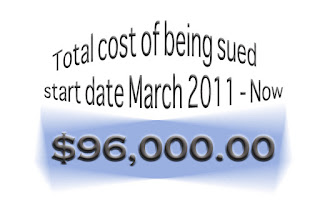 Then there are other cases where the law, the lawyers, the courts, the plaintiff, need to be put in check by something that is absent, regulation. Checks and balances of the misuse of defamation law are entirely absent at the required time if they exist at all. There is a madness to defamation law that its proponents fail to see.

Instead what does occur is that litigious malcontents motivated to hide the truth at all costs are supported by a system's flaws. They quickly recognise it is these flaws that are the weakness. The flaws are denied by all the players who'd rather remain blinkered or silent in the face of the contradiction to the concept of justice that this represents. The law and the compliance of the players in effect assists those who wish to use them to deter justified defence. The ultimate aim of the litigious malcontent is not to actually allow it to get to trial of course but to force compliance and up front payment of damages via the actual financial duress required to support proper defence plus through threats of more and worse financial duress if the defence does not roll over and pay up.

Reputation though is not sacred, and (in the majority of cases) reputation is earned good or bad and the owner needs to own responsibility for it.

Laws like defamation law as conducted in England and her copy colony Australia do not encourage unfettered reporting. Its punitive nature does more to harm the open and transparent communication of truth than, as it claims, to protect us from vicious and/or malicious untruths and gossip. Proponents of Defamation Law as it is conducted in the UK and Australia would disagree. Prove to me, I state to them, how it works to the advantage of truth, open, honest, transparent discourse and I'll make concession.

For now it is my learnt contention the exercise of this law is an awful joke, poorly dressed up by its proponents as a protector. It is in fact the entire opposite and a limitation on our freedom and right to impart and inform; a hinderance to fair comment and a barrier to the public discussion of matters of truth.

It is why Savile remained "hidden in plain sight" for so long.

Note: "Paul Connew, when editor of the Sunday Mirror in 1994, did have "credible and convincing" evidence from two women who claimed Savile had been guilty of abusing them at a children's home. Though "totally and utterly convinced" they were telling the truth, the paper's lawyers, after a careful assessment, decided it wasn't strong enough to risk publication." Extracted from: http://www.guardian.co.uk/media/greenslade/2012/oct/10/jimmy-savile-bbc


(many thanks to a reader for sending this additional link)


This fear given all the facts and evidence and decision to not risk exposure is clearly why Defamation Law Reform is required. It is the same fear that permits minor or middling matters in comparison to the Savile case undergo the same protective immunity from action. The point is the effect is the same whether a major case or not. Defamation Law is utilised as a weapon to hide the truth in the same way. The outcome being there is a great fiscal cost to a genuine defendant who is actually a victim recounting their unfortunate experience and significant social cost and loss of faith in the law the legal system and great harm overall in the context of social justice and right to know. Law reform is utterly necessary or the "flawed industry" that is the current situation will continue to hinder our right to the truth, our right to inform and the right to provide fair comment (truth) about anything connected with anyone.

The protections afforded our politicians need to be extended to the wider population it discriminatory from any angle except from the judicial bench it seems.

What Law Reform? A few suggestions that occur out of experience...
1. Truth is not actionable - damages against the Plaintiff who persists despite being aware of the truth and in the face of clear available evidence.
2. The Plaintiff bares the burden to prove damage and that the information is untrue.
3. The Plaintiff must prove a successful PRIMA FACIE case exists prior to the action being accepted in the courts.  This alone would cut out an enormous amount of the crap going on surrounding defamation actions.